Factual and up-to-date demographic and population data online with Populationof.net 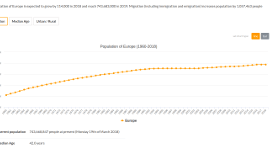 There has always been an interest in population data. Ancient Egyptian, Roman, Greek and Israeli societies used census data to register citizens and foreigners, including arms-bearing individuals and their real property. Ancient census was also used to calculate the number of people fit for military service, to assess geographic distribution of the population and to determine population by sex and age. Currently, demographic data plays an important role in various research fields, therefore the importance of accurate and up-to date information about current population cannot be overstated. There are numerous public websites that claim to offer statistical population and demographic data, however it often turns out that they contain obsolete, outdated or simply incorrect figures, which is unacceptable for everyone in need of exact and reliable information.

The developers behind Populationof.net understand the necessity for only the most reliable, correct and trustworthy information available online concerning demographic and population data. That’s why they have come up with a project that is going to revolutionize online research and make data collection much easier and more enjoyable.

On the home page of the platform you can see a short introduction into the fascinating world of population statistics, together with brief overview of demographic data from all six geographic regions – Europe, Asia, Africa, Latin America and the Caribbean region, Northern America, Oceania. The home page also displays current world population data, life expectancy, median age, as well as births that occurred this year and on current day. Populationof.net uses state-of-the-art resources and smart algorithms to gather live population data from official websites, so that you can watch with undeniable satisfaction how world population changes every second. The geographical regions are lined up alphabetically in the panel on the top of the home page. After clicking on the name of the region you will be redirected to its dedicate page that contains in-depth analysis of demographic data.

You will be surprised how informative each subpage of an individual region is. On the top of a dedicated subpage there is information regarding predicted population growth in the current and following year, including emigration and immigration figures. What follows is a line or bar chart, depending on your choice, that features population data, median age and rural versus urban demographic distribution since 1960. This section also contains historical data presented in a form of an organised table. Also, there is a chart depicting expected country’s population between the years of 2019 and 2050. And finally, on the very bottom of the page there is a chart that shows historical and future estimated population growth.

Each page dedicated for a particular region comes together with a list of region’s countries organised alphabetically. If you click of the country name, you will be redirected to its own dedicated subpage that analogically contains relevant population, life expectancy, median age and density information presented in a form of brief descriptions and user-friendly charts and tables.

This innovative platform is useful for individuals looking to invest in real estate in a foreign country, businessmen interested in expanding their ventures, students that require qualitative and quantitative data for their university projects and finally for everyone interested in changes that happen all around the world when it comes to population and demographics.